Turn the Other Cheek, or Rather, Hemisphere 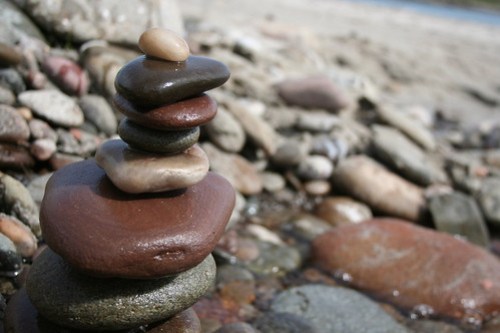 In the last few months I’ve been reading and studying the brain for my course and trying out some of the exercises on myself. One of them is something I like to call “whole brain integration.” The technique is to basically understand your brain in four different sections, understand what each section does, and learn how to work it in a moment of high reactivity, or a big feeling. The four sections (overly simplified for the purpose of this exercise) are the low brain or primal brain, the high brain, the left brain and the right brain.

Put A Leash On Your Lizard Brain

Big feelings mean the body is in a “low brain” fight/flight/freeze reaction. As soon as you notice this reaction you can begin the whole brain integration technique. Starting in the left hemisphere you use the labeling mechanism of the left brain to name the feeling as accurately as you can. Then you move over to the right brain, the experiential, as you feel that feeling fully. When you are aware of the feeling of the reaction you shift into the high brain responsiveness which is mindful and present. Taking a moment to simply notice that awareness is bigger than the feeling of fear turns on the higher brain functions and enables you to maintain clarity and a sense of seeing the big picture. From there you’re better positioned to move into taking a conscious action.

I have been trying this out in real time, using myself as a guinea pig. I was driving the other day and almost got sideswiped by a car who did not shoulder check. I felt the reaction as my nervous system became activated. Even though there was no longer a threat I noticed a knee jerk reaction of “that guy doesn’t know how to drive” taking place. An attack thought. An act of defense. Being a long-time student of A Course In Miracles, I knew this reaction to be an egoic one, and being a new-time student of brain science I recognized this to be the lower, primal brain reaction. I could literally feel the hormones moving through my body, fight/flight/freeze … blindly react.

I decided to try the whole brain integration technique. Can this actually be done while driving a car down a highway? I figured it was probably safer than staying in a full blown primal brain reaction, so I decided yes, let’s try.

Kick on the left brains labeling functions and name what I am feeling right now. I scanned for a half a second to find an accurate word to match the feeling: “I feel threatened.”

Close the gap to become the one who is threatened. This in A Course in Miracles terms is the shift from the ego to the holy spirit, which shifts our perspective from separateness to oneness. This part feels counter-intuitive at first, because instinctively we want to move away from scary feelings. But in moving toward the feeling and becoming it; we can allow a shift from left brain to right brain. This way we can make the journey from labeling it, to experiencing it, to being it, and finally into just being. Now i am feeling threatened and fully conscious of it. I have just closed the gap between ‘me over here’ and ‘threatened over there’ and in this space there is no longer room for unconsciousness. In this space awareness is present. Awareness is the key that unlocks the upper brain.

Move into the upper brain … in being willing to take the hit, and feel the sensation of “threatened” in my body, I now have full access to awareness. I have become threatened, and I am aware of it. In that moment I can kick on the upper brain functions of mindfulness and compassion. I can recognize that awareness is bigger than the “threatened” feeling, and I can now hold that feeling till it passes. I have made the shift into the higher brain functions, and I can now move forward with consciousness awareness and presence of mind.

Now that I am in the high brain, I can figuratively turn the other cheek, feel the threat, take the hit, spiral inward to presence of mind and take a conscious action from there. I can feel the calming hormones enter my bloodstream as it self regulates and calms everything down. In this stage of the practice I can act consciously. I can tap into all my higher brain functions, and I can now look to the other person with compassion, empathy and love.

What if I can do this during a heated moment? What if I can take the hit, feel what I am feeling, and cycle through the brain into a harmonious and conscious response? These higher functions of the brain are where we can tap into empathy, compassion and presence. If I were face-to-face with a person in that moment, I would be able to stop and think “I wonder what they are feeling right now?” If they just slapped my cheek, then they must be upset? Maybe angry? Hurt? Afraid? In that moment I can stop a potential blow out by simply activating the empathic capacity within me and say, “you must be feeling really upset right now, anything I can do?”

Turning the Other Cheek

I realized that the phrase “turn the other cheek” can be a reminder of this double blow technique. The ancient practice of ‘turn the other cheek’ is really about feeling the blow inside myself, honoring my own feelings, and rather than reacting from stress, retaliation and defense, I am now free to be present to what they are feeling. I feel the hit that comes when someone moves in on me suddenly or in an act of attack. I can then take the second hit by allowing it to hurt, and using that awareness to take a higher road and finally act from mindfulness and presence. Most importantly I can tap the capacity inside myself that knows intuitively how to treat other human beings with unconditional love, acceptance and respect. When we can give other people permission to feel what they feel, while creating an environment of safety and love, relationship suddenly becomes very simple.

Posted on August 22, 2013 by ChristineWushke in Blog, Diary of a mystic yogi

View all posts by ChristineWushke →

2 Responses to “Turn the Other Cheek, or Rather, Hemisphere”